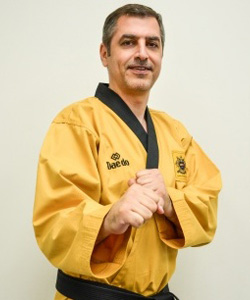 In 1966 a champion was born! It took many hours of practice, hard work, dedication and high spirits for Samer to became a national champion in 1982. Medals started becoming the reward for his dedication. Marking one of his biggest accomplishments, Samer Kamal won the bronze medal in Taekwondo in Seoul 1988 Summer Olympics. He was the first Jordanian athlete to get an Olympic medal for Jordan. This gave many Jordanians pride in his achievement during the 1980s. Samer Kamal is a holder of an 9th Dan Black Belt since 2017, is a 1st Class international referee since 1999 and an international trainer since 1990. Other than at work, Samer is active in many sports communities. In 2009, he was named an executive board member of the World Olympians Association (WOA). In November 2011, Samer become president of Asian Olympians Association (AOA). And, Samer Kamal is a proud new honorary advisory member in the Kukkiwon (World Taekwondo Headquarters). In 1990, Samer opened Champions Taekwondo Center, his first Taekwondo school in Jordan. 22 years later, Champions Martial Arts was established in Canada, Mississauga.With all his experiences, discipline, leadership and practice, Samer has promoted more than 2000 black belt students worldwide to date.