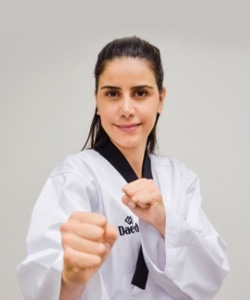 Taekwondo instructor Grand Master Zaha Talhouni is one of the highest ranked females in the world. She is a certified referee and a holder of 7th Dan Black belt since 2017. She believes in strength training and pushes students to their highest limits to achieve break throughs in their practice. Her tough approach allows serious and competitive students to master self-discipline in order to be confident and proud of what they can accomplish.